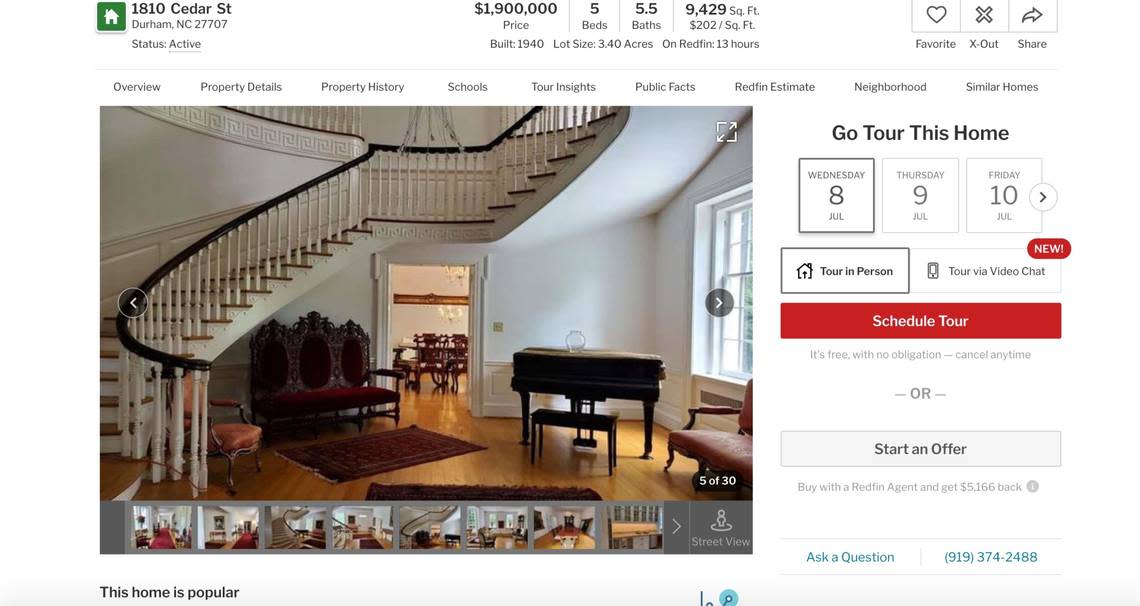 The former home of novelist Michael Peterson — the home where Kathleen Peterson died in 2001 and the home featured in the Netflix documentary series “The Staircase” — is once again up for sale.

The 9,372-square-foot house on a sprawling 3.4-acre lot in the heart of Durham is listed for sale at $1.9 million. That’s in line with the tax value of the home, listed by the Durham County Tax Administration at $1,937,733. Tax records show that the current owner is Biond Fury, a clairvoyant and medium from New York.

The five-bedroom mansion, built in 1940, has become a point of interest for true-crime devotees and viewers of the popular Netflix documentary series “The Staircase.” A large portion of the first eight episodes of “The Staircase” were set at the Peterson home.

Michael Peterson told police he was sitting by the pool at 1810 Cedar St. on the night of Dec. 9, 2001, and when he went inside around 2:30 a.m., he found his wife at the bottom of a back staircase, where she bled to death.

Michael Peterson went on trial for Kathleen’s murder in 2003 and was convicted in one of North Carolina’s longest trials. He was in prison for eight years before his conviction was overturned because of improprieties at the State Bureau of Investigation. Peterson entered an Alford plea while awaiting a new trial in 2017, allowing him to plead guilty to manslaughter while maintaining his innocence.

Peterson still lives in Durham and wrote a book, independently published in January 2019, called “Behind the Staircase.” The book chronicles his life since Kathleen’s death, including his time in prison.

Harrison Ford has been tapped to play Peterson in an upcoming project based on “The Staircase.”

Fury, the second post-Peterson owner, purchased the home for $1.3 million in 2008 from Jason Balius, the former co-owner of the Mad Hatter Bakeshop in Durham.

The house was also owned by nationally recognized scholar and author Henry Louis “Skip” Gates Jr., who lived there while teaching at Duke. Gates bought the house in June 1989 and sold it shortly after, in order to take a teaching position at Harvard. Gates is the host of “Finding Your Roots” on PBS.

In the spring before Gates bought the home, it was a location for the 1990 movie “The Handmaid’s Tale,” which was filmed in Durham and Raleigh and starred Robert Duvall, Faye Dunaway and Natasha Richardson. The property was used as the Commander’s home and was featured prominently. The exterior shots are very recognizable from “The Staircase,” but also the scenes inside the wood-paneled study inside the home. There is even a scene filmed on the back staircase where Kathleen Peterson died.

In late 2018, Fury started a GoFundMe campaign to raise money for repairs at the home. The listing for that campaign has since been removed from the website.

Photos accompanying the listing on the real estate site Redfin show a renovated home with refinished hardwood floors, an updated kitchen and beautiful spiral staircase. There are no photos of the back staircase where Kathleen died, and a photo of the backyard shows the swimming pool to be drained. A large fountain near the pool when the Petersons lived there seems to have been removed.

The listing on the Redfin site had been viewed more than 5,000 times as of Wednesday morning. There are 30 photos of the house, inside and out, at the Redfin site.